Recently, New Profit and FSG co-hosted a webinar, the second in a series on systems change.  The title of the webinar was Shifting Mental Models to Advance Systems Change.  In our first webinar we shared a framework for diagnosing and addressing systems change, which you will find below. 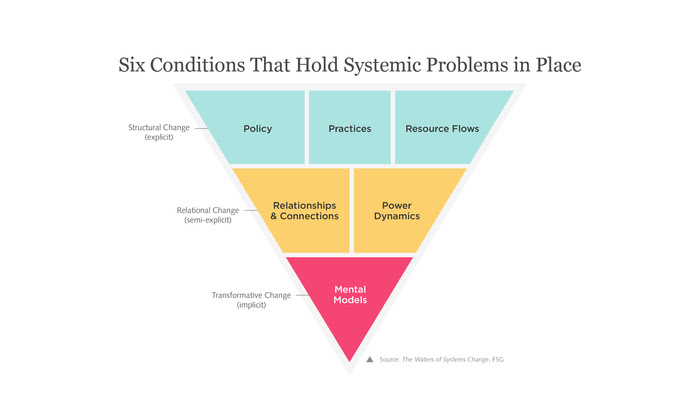 For more on this framework, here’s a link to the article in which it originally appeared
https://www.fsg.org/publications/water_of_systems_change

Notably, in the first webinar we used the above framework to identify six conditions at three levels that are part of changing a system. The first level is structural in nature and includes policies, practices and resource flows. The second level is relational and includes relationships and connections and power dynamics. The third and deepest level is the domain of mental models. We identified mental models as the most transformative of the six conditions of systems change.

Experience has shown that many efforts to change systems emanating from philanthropy, government and the main stream nonprofit sector focus the lion’s share of activity on change at the first level – the structural level of systems change.  Yet successful systems change must place significant attention on the second and third levels of change – the cultural levels.

For example, the Affordable Care Act passed during the Obama administration is a systemically-focused effort that led to sweeping change at the structural level, but very little change at the cultural levels.  Inattention to the cultural levels is a large part of why we find ourselves today stuck in the middle of health care reform – neither able to move forward or backwards. A counter-example to ACA is the Marriage Equality effort, championed by the Gill Foundation and many others, that achieved significant success by placing sufficient effort against cultural change – most specifically, the narrative shift required to drive policy change.  Yet even here, while the effort was largely successful in its policy change aims, we are seeing push back on the new narrative as old mental models reassert themselves.

So we were excited to host our second webinar in this series on the topic of mental models and to include as a speaker and commentator Julie Sweetland, and expert in mental models and a Senior Advisor at the Frameworks Institute. On the webinar, Julie’s commentary was paired with stories from the field by Darrell Scott from PushBlack, and Rick Ybarra and Tammy Heinz from the Hogg Foundation. The PushBlack and Hogg Foundation’s stories can be heard on the webinar recording.

For this blog I’d like to focus on the perspectives Julie shared about Frameworks’ insights on mental models. Frameworks has worked for the last 20 years on understanding mental models related to different social and environmental issues. Julie shared that the Frameworks Institute actually refers to mental models as “cultural models,” seeing mental models as cognitive shortcuts created by people living through and experiencing years of expectations in a given culture.  According to Julie, the mental models that individuals hold tend to be automatic. They are a brain trick for thinking fast and making quick sense of lots of stimuli that come our way, all day, every day. And they are often implicit, meaning people might not realize that they hold a certain mental model. Sometimes they are conscious of it, other times they aren’t.

Strategic advantage in shifting a system begins with both understanding existing mental models around the issue you are involved with, and figuring out how to un-stick the most prominent mental models that impede change.

Easier said than done. By way of example, Julie shared three mental models that are embedded in U.S. culture and stand in the way of progress on a host of social and environmental issues:

These three mental models, according to FrameWorks, shape public thinking on a host of social and environmental issues and are barriers to productive conversations that can lead to collective understanding and decision making regarding solutions.  In effect, these mental models are a principle underlying cause that prevents us from getting the stuck unstuck.

So, what are effective strategies for dislodging unproductive metal models?  Well, first, let’s look at what doesn’t work. Julie shared a few thoughts on this:

OK, so now we’re ready to share FrameWorks’ perspective on what does work to shift and un-stick mental models:

Here are a few examples of successful mental model shifts that, for me, follow FrameWorks’ prescription.  First is the metaphor of “toxic stress.”Many practitioners and researchers in early childhood and the youth development arena had known for years that when a child experiences severe or prolonged adversity – such as chronic neglect, caregiver substance abuse or mental illness, exposure to violence, or the accumulated burdens of family economic hardship without adult support – they will likely experience challenges in their physical, emotional, intellectual and spiritual development.

However, consistent with the societal mental model of individualism, many assumed this was an individual problem related to the deficits of specific children or their parents, and not a societal problem.  Then, the Center on the Developing Child at Harvard University coined the term “toxic stress.” The comparison of stress hormones to chemical toxins helped people think about the myriad of negative externalities that a child can be exposed to – it gave people a way to wrap their minds around the relevance of structural causes that affect child development. By building up the mental model that conditions shape development, change makers created shifts within the early childhood, education and youth development fields. Policy, practice, and resource flows were affected: for instance, programs now place greater emphasis on responding to childhood adversity through trauma-informed approaches; funding has been directed to reduce and buffer toxic stress; and policies at the institutional, state, and federal levels have been adopted and implemented.

Another mental model shift referenced earlier in this blog is the work done to change the narrative related to marriage equality. For years the marriage equality movement was focused on the value of rights: they argued that “same sex individuals should have the same rights and access to marriage as others.”  This was not compelling to many people – perhaps because it allowed the mental model of Us vs. Them to drive opinions.  After dozens of legislative defeats, the movement re-grouped and made numerous shifts in strategy.  One key change was shifting to the values of love and commitment. They shifted their narrative to a message of “all people who are in love should have access to marriage.” As advocates exercised the mental model that love is love, public opinion shifted, helped fuel the widespread adoption of new marriage equality legislation in a number of states, and ultimately yielded a landmark ruling from the Supreme Court.

Both of these “success stories” also show the durability of mental models. Change makers were successful in building up productive mental models (conditions shape development, love is love.) That doesn’t mean that the pre-existing, unproductive models went away entirely. The belief that what doesn’t kill you makes you stronger is still used to dismiss or resist attention to childhood adversity.  Marriage equality is under renewed attack in some states as the archetypal “Us vs Them” mental model is evoked with increased intensity.

Of course, taking all this into account, it’s important to recognize that on any given issue there is never just one mental model. Julie estimated, based on FrameWorks’ research into mental models on different issues, that advocates can expect to encounter 20 to 30 widely shared mental models at play on a given issue.  That’s a lot - but it’s also finite. Change agents should have a long-term strategy for navigating these models. FrameWorks advises that advocates identify the most prominent mental models shaping people’s thinking, and then, scrupulously avoid reinforcing unproductive ones, while finding ways to build up or create new mental models that are consistent with the cause.

Mental models are tough to get unstuck, but not impossible.  As challenging as the task is, unsticking negative mental models is essential work for those attempting the adventure of systems change.

Click play below to view the full recording of the webinar.